You are here > Home > Things to Do > Greenwell Walk 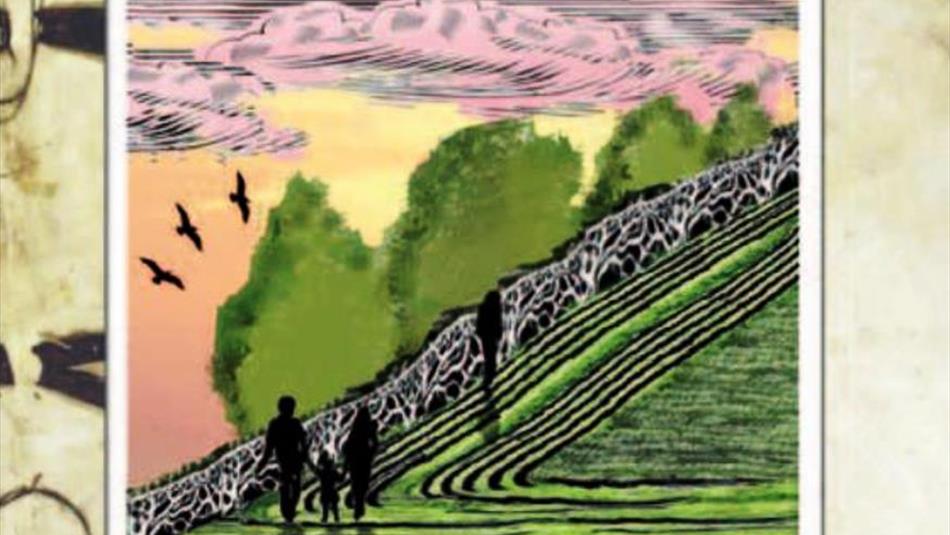 Starting from Station Road, Lanchester take the Lanchester Valley Railway Walk from the statue of the Roman Soldier and head towards Durham.


Lanchester Valley Railway was built during the 1860s to carry iron ore from Cleveland to the Consett Iron and Steelworks. The line was closed in 1966. Dora’s Wood can be seen on the right hand side. The wood was planted in 2000 by the Woodland Trust and volunteers from Lanchester. It is dedicated to Dora Greenwell (1821–1882), a poet, who lived at Greenwell Ford. The farmland beyond the wood is part of the Greenwell Ford estate.


Either turn right at Malton and take the lane over a bridge to Officials Row. This was built as terraced housing for the workers at Malton colliery which operated from 1870s–1960s. There were originally three rows of houses, two for the workers and one for the officials. The school, tennis courts and workers houses have all been demolished. ‘Officials’ Row’ and the Miners Welfare Hall are still standing, and the hall is now a garage. Twenty two men lost their lives at the colliery including a 13 year old boy employed
as a tub cleaner who fell into the ‘small coal’, he was unable to get out and suffocated.


Walk along Officials Row and take the path at the end to Malton Nature Reserve. At second stile turn right, cross next stile into site of old colliery school. The school stood in the corner of what is now the nature reserve and rhododendrons, laurel and loganberries remain from the garden.


Cross stile and follow footpath diagonally across two fields, crossing stile in hedgerow between fields. The concrete ditch crossing the field was built to take water from mine workings on the hillside.


Join track to Biggen House farm, turn right and follow Lane to Biggen terrace. Alternatively, continue along the railway line and look for views to Burnhopeside Hall on the left hand side (No public access). The hall is 18th century but was enlarged during the 19th century; it is listed Grade II*. The grounds are planted with ornamental trees and also include a walled garden and ice house. Ice houses were used to store perishable food. The hall was home of William Hedley (1779–1843) designer of the steam train, Puffing Billy and Wylam Colliery Waggonway (1813–15).


At end of trees turn right through gate and follow footpath along field edge to Biggen House farm. Continue through farmyard to join lane, turn left then immediately right and follow lane to Biggen Terrace.


Turn right from Hamsteels Lane onto footpath, bear left around farmhouse and cross stile. Walk straight to wall and follow downhill. Over next stile turn right and cross stile into lane. Follow lane downhill. Cross stile and head straight downhill towards Hollybush. A leaf shaped stone arrowhead made from flint was found there in the 18th century (probably Neolithic 4000BC–2300). There was a drift mine at Hollybush and two coal pits in the fields opposite Sqaure House Farm.


Over next stile turn left then over stile walk diagonally across field to next stile. Turn left onto lane, follow over bridge and join footpath on the right. Continue over four stiles to Bargate, turn right and walk on the roadside of the B6301 back to Lanchester. Please note: Care should be taken to follow the advice of the highway code. Take special care as traffic may be moving very fast. Part of the road is on the route of Dere Street–the main Roman road between York and the Firth of Forth in Scotland.


On the right hand side there are views to Greenwell Ford (Grade II), (No public access). Greenwell Ford was built in the early 19th century but is believed to be on the site of an earlier house owned by the Greenwell family. Doctor William Greenwell lived there. He was a noted historian, archaeologist and author and was made Canon of Durham Cathedral in 1854. Canon Greenwell was a keen fisherman, his famous trout fly ‘The Greenwell Glory’, is still used by many anglers today. As you enter Ford Lane you will notice a house called ‘West Park’ on the left hand side. This was re-built using stone from Crook Hall in Consett by George Neasham a Victorian historian.