You are here > Home > Things to Do > Durham Peninsular Walk 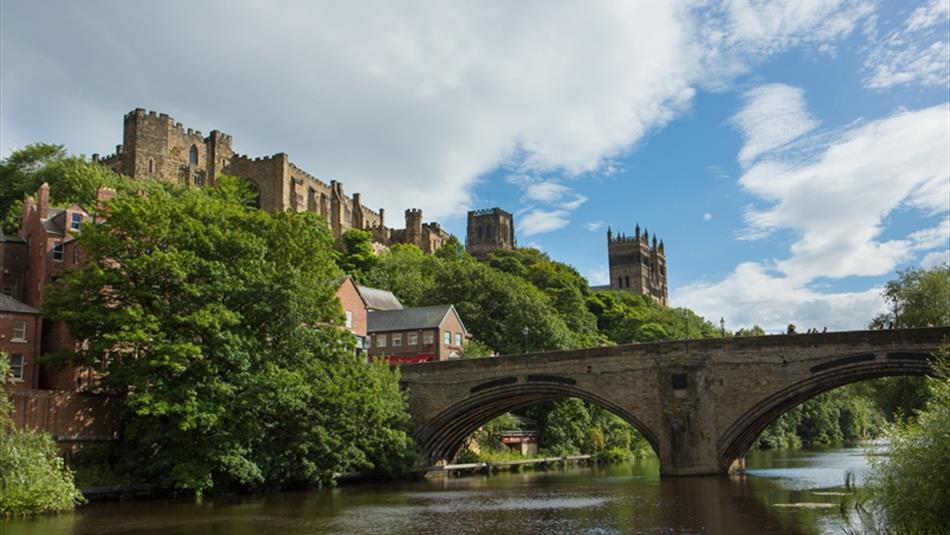 Starting in the Market Place of Durham City, this walk will take you around the Riverbanks and winding historical Streets of the City Centre. Allow 1-2 hours to complete this Walk. Market Place - Continue the walk by crossing into Saddler Street keeping to the left until you reach a bridge. 2. Elvet Bridge – Do not cross Elvet Bridge but descend the stone steps on the left. At the bottom of the steps you will see Jimmy Allen’s Bar. 3. House of Correction (Jimmy Allen’s) Go under Elvet Bridge for the start of the riverside walk. A little way down the path look back at Elvet Bridge to see the remains of what was a thirteenth century chapel built into the bridge. Follow the footpath along the riverside path; eventually you will see a garden folly in the design of a small Doric temple. 4. The Count’s House – Proceed up hill at this point. 5. – King David’s Hiding Place – Go up the hill to Perpend’s Bridge 6. This Bridge was rebuilt after the Great Flood in 1771. Take a short walk across the Bridge for a picturesque view of the Cathedral and the riverside, and a plaque of the poem written by Sir Walter Scott. Re-cross the Bridge and walk up the slope leading to an archway Watergate 7. The old postern was removed in 1778 to allow carriages down to perpend are Bridge. Notice the original castle walls flanking the archway. You are now entering South Bailey, a short walk along this street you will see the Church of Saint Mary –Le – Less. 8. Standing in the shadow of the Cathedral this was a medieval garrison Church and is now St. John‘s College Chapel. As you approach the eastern side of the Cathedral lookup at the Rose Window constructed by James Wyatt. To the right of the cobblestones of Bow Lane. 10. Bow Lane – On this corner is Durham Heritage Centre and museum 11 formerly the Church of St Mary – Le – Bow which was another garrison Church. Opposite is Dun Cow Lane. Walk up this narrow street beside the Cathedral and enter Durham’s World Heritage Site. On entering Palace Green turn right and you will pass the Café On The Green and Bishop Cosin’s Hall before walking down Owengate and left onto Saddler Street. North Gate - Continue walking down this street. As today, medieval Durham’s Saddler Street and Fleshergate were busy with traders and also being the main route to the Cathedral and Castle. Saddler Street was famous for shoe making while old Fleshergate was the Butcher’s quarter. Finally you arrive in the Market Place again. We hope you enjoyed your walk. This route passes near to the following Taste Durham establishments:- The Undercroft, Cafe On The Gree, Cafe Cenno and Oldfields. See numbered references below:
1. Market Place – The origin of the Market Place is medieval but now largely Victorian. 2. Elvet Bridge – Was built in the twelfth century. Two century chapels were built at either end of the Bridge. Travellers would pray for a safe journey and make a donation to the Church and for maintenance of the Bridge. 3. House of Correction – Built in 1662 as a gaol, now a public house named after Jimmy Allen, a Northumbrian gypsy, who was official piper to the Duchess of Northumberland. His law breaking exploits meant he was on the run for most of his life. In 1803 he was convicted of horse stealing. He died in the House of Correction in 1810, aged 77, shortly before his pardon arrived. 4. The Count’s House – A garden folly in the style of a Doric monument built in the 1820’s Count Josef Boruwlaski having travelled and performed around Europe arrived in Durham in 1882. An exiled Polish Count, 39 inches tall, he was 98 years old when he died and is buried in Durham Cathedral. A suit of his clothes, violin, and a statue of him can be seen in the Town Hall in the Market Place. 5. King David’s Hiding Place - It is believed Kind David of Scotland escaped death by hiding in this tree after the Battle of Nevilles Cross. The Rev. Tristram had the remains of the tree transported here from the banks of the River Browney, three miles to the east of Durham. 10. During his reign, King William I decided to visit Durham to see the body of St Cuthbert whose tomb is in Durham Cathedral. He threatened to kill senior churchmen if they had misled him if the saint’s body had not been preserved. However before the king had even seen the coffin, he was afflicted by dread and a burning fever. He fled the City and did not dismount his horse until he had crossed the River Tees some twenty miles away. The route William took was down Bow Lane and this is known as the “King’s ride” or “King’s gate.” 13. Was built in 1072 as part of the fortifications and gates protecting the Castle and Cathedral. In the fifteenth century Bishop Langley had the gate rebuilt and added a gaol. An eyewitness reported the conditions were appalling. In 1820 the gate was dismantled to allow through access by large carriages.