You are here > Home > Things to Do > Cockfield Fell Heritage Walk 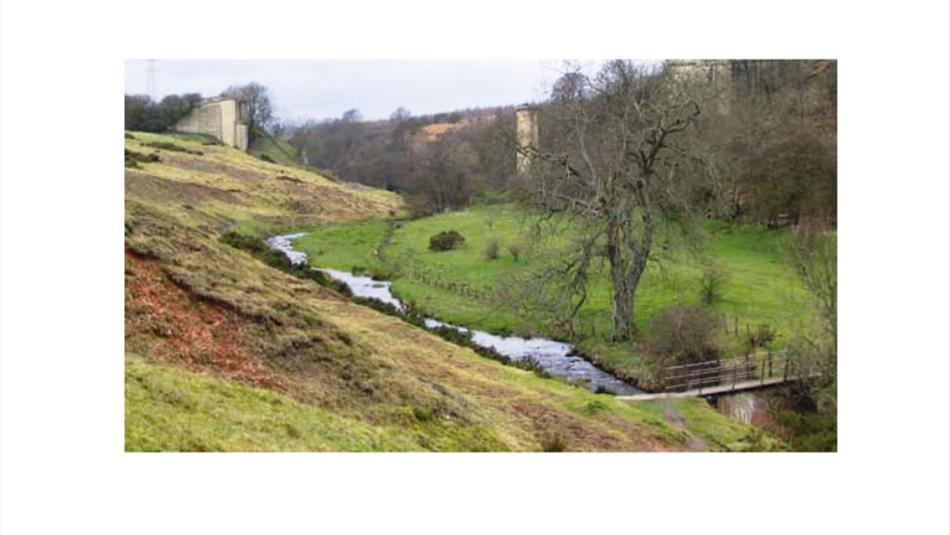 The walk starts from Hollymoor car park. From here turn left and proceed to the road junction. Turn right and head into Cockfield. A knight from Suffolk, Robert de Cockfield, a judge and sheriff representing the king in various parts of the north, decided to reclaim and settle in an ancient manor house and its estate. He decided to call it Beaurepayr – beautiful spot – but it soon became known by his own name, Cockfield.

A. Head straight through Cockfield and turn left opposite St. Mary’s Church towards Cockfield Fell.

B. Cockfield Fell is England’s largest scheduled ancient monument – almost 350 hectares in size. The fell has a rich historic past, which includes Pre-Roman settlements and industrial evidence that dates back to the fourteenth century. In 1869 the fell became a regulated pasture, managed by the Fell Reeves. This gives local stockholders the right to graze their animals on the land after paying a yearly rent.
Pass the cemetery on your left and proceed towards Fell House. Keep on this road, passing the Durham County Council disposal site.

C. Numerous pigeon lofts abound the area, all brightly painted. To the right the remains of a stone ventilation shaft can also be seen, a relic of Gordon House Colliery which closed in the 1960s. The landfill site is a former Whinstone quarry, known as Cleveland Dyke. The stone was used for road building, leaving the fell by railway.
Pass in front of Fell House. Here the road becomes a track.

D. To the left, the remains of Lands Viaduct come into view. Parallel to the path are the remains of the Gordon House Colliery tramway.
Follow the path as it bears left, leading down to a footbridge. Cross the River Gaunless, turn left and follow the river upstream on the course of the Haggerleases branch of the Stockton and Darlington Railway.

E. The viaduct was built in 1862 by Thomas Bouch, who designed the Tay Bridge in Scotland. Originally a single track railway; sufficient space was allocated to allow a second track, which was added in 1905. The decline of this railway was mainly due to the closing down of the local collieries. Subsequently the railway was dismantled in the 1960s. Follow the course of the Haggerleases line to a stone bridge near The Slack, just below Butterknowle.

F. The Haggerleases branch of the Stockton and Darlington Railway was originally built in 1830 as a horse drawn wagon way to carry coal out of the area, the Gaunless Valley’s first railway. Horses were replaced by steam trains in 1856. This new transport system enabled quarried stone, coal and coke to reach new-found markets, increasing job prospects and the pace of the industrial revolution. As you progress along the course of this former railway there are the remains of ‘Beehive’ coke ovens to your right amid the undergrowth. These provided fuel for the railways and iron industries.
Go straight over Skew Bridge.

G. Built in 1830 by James Wilson of Pontefract, the bridge crosses the Gaunless at an angle of 27 degrees. This bridge is unique due to it being an early example of a bridge built on a skew without a keystone.
Proceed along the railway to the next bridge but do not cross. Turn left crossing a stile and join a track. Turn right and follow the track to the road. Turn left and walk up the hill for a short distance before crossing a stile on your left back onto the fell.
Follow this path until you reach the course of a former railway.

H. This is the Bishop Auckland to Barnard Castle line which opened in 1862. The line carried both passengers and freight. As the collieries closed, use of the railways declined until it closed in 1962.
Head straight over the old railway and follow the right hand path up the fell.

I. The whole area is strewn with earth workings, evidence of the fell’s coal mining history. Mining first started on the fell in the fourteenth century. This was possible due to coal seams being very near to the surface in this part of west Durham.
Follow the path until you reach a stile. Do not cross but follow the fence to the right and head back to the road. Turn right at the road and then left at the junction back to the car park.
Route information provide by Gaunless Valley Heritage Project.