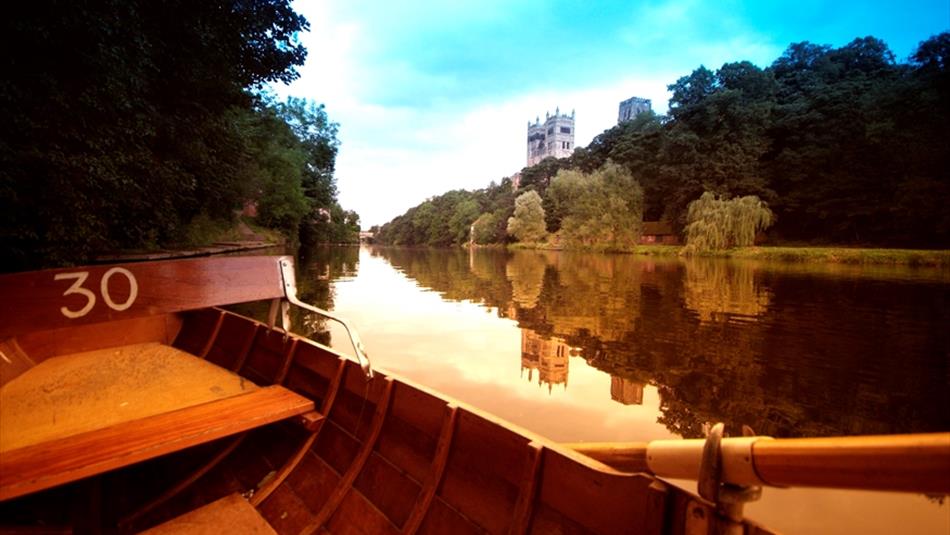 The riverside and farmland route follows surfaced paths or roads and can be undertaken without walking boots at all times of the year. The route consists of two relatively level sections, separated by an ascent of 20 metres (65 feet) in 1 kilometre (3,000 feet), a gradient of 1:40, after point (B) on map and a corresponding descent along Frankland Lane. At two points along the walk it is possible to take a short-cut back into the city centre.
The route crosses a number of roads and you should take care when crossing these roads. Where possible you should walk on pavements or pedestrian paths.

Turn right outside the Gala Theatre, Millennium Place (A) on the map.

Go down two flights of steps through the Walkergate Complex to Freeman’s Place, cross Freeman’s Place and turn right.
At the end of the White Building opposite Premier Inn take the path to the left beside the Car Park, which leads to Pennyferry Bridge.
Cross the bridge over the River Wear and, in front of the Radisson Hotel, turn right and follow the pavement beside the river.
At road junction cross the road, keep right and follow the pavement passing Crook Hall & Gardens on your left.
Where the roadway passes between two houses it bears left (do not take the right fork into the sewage works). With the sewage works on your right follow the road which soon begins to run through open farmland.
Turn left onto a surfaced farm track which comes in on the left about 250 metres after the sewage works (B) A-B 1.4 Kilometres (1,500 yards)
Follow the track (with the East Coast main railway line over to your left as it gradually climbs and bears sharply right at Frankland Farm.
Cross stile and continue along the track in front of the farm buildings and you will get a distant view of Durham Cathedral and Castle silhouetted against the sky on your left.
At the end of the farm buildings turn sharp left and walk between Frankland Farm and Frankland Park Farm (on your right). At this point it is possible to return to the City Centre (see short –cut 1 on map).
Pass through a large metal gate and continue straight ahead until you come to a bridleway on the left (C) B-C 770 metres (830 yards) The bridleway forms part of a cycleway between Newton Hall and the City Centre and you should be prepared for riders to approach you from either direction. You may also encounter cyclists through the Local Nature Reserve and on Frankland Lane.

Turn left onto the Bridleway which runs between fields, bears to the right and gradually climbs up towards the railway. When the bridleway begins to run through bushes a path turns off to the right. (If you begin to cross the railway bridge you have gone too far!) Take the surfaced path to the right and follow it through the cutting. This path follows the route of the old railway line which once carried express trains running from London to Edinburgh.
You are now walking through Low Newton Local Nature Reserve. Where you pass a wooden post numbered 13 the route to the original railway main line from Durham to Newcastle bore off to the left of the Leamside-Bishop Auckland branch line.
Continue following the surfaced path which bears gently round to the right through farmland. After passing through a boom gate you will come to the remains of a set level crossing gates, and here the 1857 railway originally ran straight ahead (D) C-D 1.3 kilometres (1,400 yards).

To the left is Frankland Prison, a category A Prison opened in 1982. At the site of the level-crossing turn right onto Frankland Lane, a track which winds through woodland and gradually descends until you pass the end of the bridleway, which you used earlier, on the right (C) D-C 1.1 kilometres (1,250 yards).
Continue straight ahead and walk between the two farms again but do not turn off at Frankland Farm, instead continue along the road which runs downhill. The road then levels out and winds through farmland with the river a short distance to your left. You will pass the end of the other farm track to Frankland Farm, which you used earlier, on the right (B) C-B 770metres (830 yards).
You are now returning on the route which you walked earlier. Before you pass sewage works, you can see the remains of a brick kiln and to its right, the gatehouse of the medieval Kepier Hospital on the other side of the river. You pass the sewage works on the left and Crook Hall on the right, and reach a fork in the road.
Take the road to the left, which runs beside the river, and you will return to Pennyferry Bridge.
At this point it is possible to return to the City Centre. (see short –cut 2 on map).
To complete the walk, pass the end of the bridge and continue along the riverside path (The Radisson Blu Hotel would have been on your right) The path then passes under a modern road bridge (Milburngate Bridge) and runs between The Riverwalk complex and the river, past a series of weirs in the river.
Immediately before you reach the medieval Framwellgate Bridge take the two flights of steps on your right. These steps bring you out in front of the Shopping Centre, and you turn left at the top of the steps and then left again after passing under an archway.
You now cross Framwellgate Bridge with one of the classic views of the Cathedral and Castle to your right.
At the end of the Bridge bear left and go up Silver Street into the Market Place, walk past the east (right-hand) end of St Nicholas Church to reach Millennium Square (A) B-A 2 kilometres (1.2 miles).

Short –cut 1
Turn right onto the road between the two farms and follow it downhill. The road then levels out and runs a short distance from the river, which is on your left. You will soon pass the other farm track to Frankland Farm on your right, and you follow the road past the sewage works (on your left) and Crook Hall (on your right). When you reach the fork in the road , take the road to the left, beside the river, and you will come to Pennyferry Bridge. Cross the bridge and when you reach Freeman’s Place, opposite the Swimming Baths, turn right. After passing the Premier Hotel on the other side of the road on your left, you will need to cross the road to climb the two flights of steps which bring you back to Millennium Square.

Short – Cut 2
Turn left and cross the bridge and when you reach Freeman’s Place, opposite the Swimming Baths, turn right. After passing the Premier Hotel on the other side of the road on your left, you will need to cross the road to climb the two flights of steps which bring you back to Millennium Square.
• Wheelchairs and buggies cannot complete the whole route since there are stiles. However a shorter version is possible and begins at the bottom of the lifts in the Walkergate Complex. It then follows the route above, using short-cut 1.