You are here > Home > Things to Do > Teesdale Way: Middleton In Teesdale - Abbey Bridge, Barnard Castle 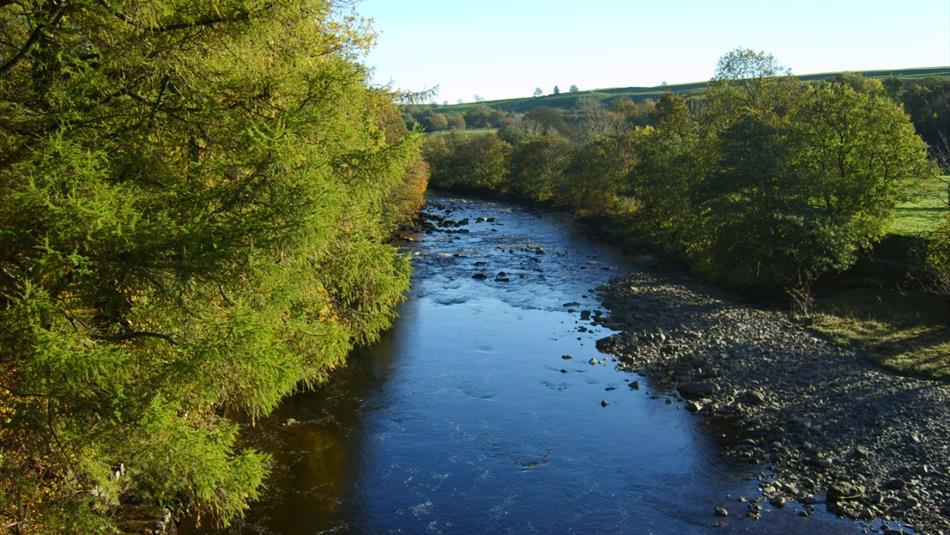 Middleton - Eggleston Bridge via North bank 7.5 kms
From Middleton Bridge follow the signposted path along the North Bank of the River Tees below the village. Passing ‘Ten Row’ formerly Miners Cottages, continue with long narrow fields on the L and the beautiful rushing river on the R. The path follows the Tees as it sweeps around Leekworth; then over stiles, it climbs a bank above the shallow rapids. Turn R and keep to the bank top before descending spiral steps to cross a small beck (we would advise caution with this section of the walk due to the steep and narrow walkway, not advisable for small children.)  Now follow the wooded riverside crossing small becks by bridges or stepping stones, soon to reach a flat flood plain where the river widens, swollen with water from the River Lune. Pass below the grazed Sun bank to a stile across a fence on the Parish boundary of Middleton and Eggleston. Here a pair of bare and exposed markers celebrate the meeting of the two parishes. Across the Intake Syke the path goes hard by the river below steep slopes, then climbs the grassy rake to leave the river and join a concrete track to the main road. Cross straight over and up the lane for 600 metres, past a long wood, to where The Way is signposted down a lane leading to Eggleston Burn. Over a Foot Bridge or Ford go onto another beck, and again choose a FB or Ford, at the crossroads go straight over. The lane passes between house becoming a grassy track, but at a stile the route strikes up an L of some trees on a natural path. At the top a well-placed seat affords excellent views over the dale, high above the ancient cultivation terraces. Cross a brick stile, then pass R of a walled garden to join a lane to the main road. Go R and in Eggleston R again down past the Three Tuns and the old village pump. At the bottom turn L then R , down under the bridge at Eggleston Hall to Eggleston Bridge.

Eggleston Bridge - Cotherstone via South bank 5 kms
From Eggleston Bridge walk past the riverside house up the road to a signposted gate on the L. Follow a green path up pasture (good view of Eggleston Hall), to a stile, and on up to a stone stile in a wall corner. From this vantage point head towards Romaldkirk and find a stile into a wood, cross beer Beck by a stone bridge and follow primrose lane into the village. On reaching Romaldkirk turn R along the green - St Romald’s Church on R, where The Way is signposted along a narrow lane. At the end take the L hand gate and bear L , between mature trees heading for a large holly. Through a way marked hand gate keep going diagonally through another hand gate to join the track sweeping down to Low garth. Over the stile bear L, then R along the bottom wall to another stone stile into old woodland, next to the swift flowing Tees. Across the next wall a small beck forms part of the parish boundary between Romaldkirk and Hunderthwaite, linked by a pair of markers. The path now follows closely above the Tees, trough old woodland and above ‘The Fairy Cupboards’ at the river’s edge. Along beneath high cliffs climb a rake to open pasture and up into Woden Croft Farm, pass in front of the first house, then through a gate past the next house go L down the field edge. Beyond the end of the high stone wall on the R, go straight ahead dropping back down the Tees. Cross Wilden Beck by stepping stones and go up steps to the riverside path. High on the opposite riverbank Percy Myres Rock towers above the trees. Soon, The Way descends into more woodland and Follows the river to Cotherstone Bridge.

Cotherstone - Abbey Bridge via North Bank 5.5 kms
Cross the FB over the River Tees into Marwood Parish and bear R across the riverside field. Cross a small FB to a rising path through oak trees leading to a stile on the L and continue along the bottom of the fields. Keep to the wall, up a slope and across undulating pasture to where it bends R. Here The way continues straight ahead to a hand gate in the next stone wall and then bears R, dropping to a stone clapper bridge. Follow down the gill keeping along the bank top to a stile and pick up a grassy track to pass R of Westholme Farm. Over a wide bridge turn R through a gate, keeping beside woodland and pass Eastholme Farm. Come to a hand gate in the wall on the R and return to the valley floor by doubling back and descending the rocky path. Through a gate at the bottom turn L soon to enter mature woodland, and follow a well-trodden path keeping R all the way to the stone staircase that descends to river level. The path now follows the river squeezing between two boulders known as the ‘Wishing Stones’. Further downstream the viaduct abutment high on the opposite bank matches the one towering above the path. Continuing through Flatts Wood, The Way eventually crosses Percy Beck, the parish boundary between Marwood and Barnard Castle. Choose between the oaken FB or Ford, but find the markers that are perhaps hidden in the undergrowth. Bear R and at Water bridge for L up the road to Scar Top and the Visitor Information Point.

Barnard Castle - Abbey Bridge via South Bank 3kms
From Scar Top, walk along the market place, past the Buttermarket and down the bank. At the bottom go straight on along Thorngate and cross the FB over the Tees into Starforth Parish. Turn L along the riverside, with views up to Barnard Castle beyond the open Demesnes fields, and on into a caravan site. After 50 metres turn sharp R up the road to an avenue of poplars, where The Way goes L at a stile. Enjoy a superb view across the river, including the magnificent Bowes Museum. Head straight across the fields, and soon the path is nicely above the Tees; and ahead you may glimpse the ruins of Egglestone Abbey. Through a stone squeeze stile turn L down the road to the riverside. Here the slow dark waters of the Tees begin to quicken before entering the gorge beyond Abbey Bridge. Cross Thorsgill Beck which form the parish boundary between Startforth and Egglestone Abbey - pair of markers on the road bridge to celebrate. Be sure to go over the old Bow Bridge to the R, then follow the road, passing below the remains of Egglestone Abbey to Abbey Bridge.
Route information provided by DCC. Guidebook available from Cicerone.