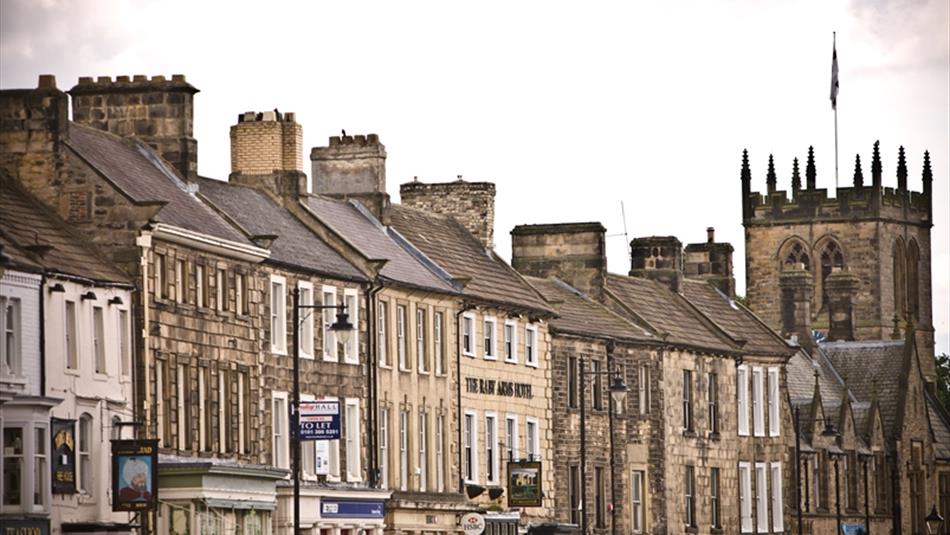 THE BLUE PLAQUE TRAIL provides information on the people and places whose contribution to the history of Barnard Castle has been commemorated by blue plaques erected by the former Barnard Castle Urban District Council or its successor, Barnard Castle Town Council.

Plaque 1 - 57 Galgate
William Hutchinson lived in Durham City in his younger days but moved into this house with his bride, Elizabeth, in 1760. He came to work as a solicitor but business was not as brisk as he had expected, and he became a prolific and versatile writer, excelling as a historian. (This plaque is not easily noticed; it is on the low wall to the left of the wrought-iron entrance.)

Plaque 2 - 45 Galgate
Cyril Northcote Parkinson, historian and satirist, has so far been the only person to be commemorated by a plaque in Barnard Castle during his own lifetime. He died in 1993.
"Parkinson's Law", quoted on the plaque, was not the only one which he discovered. Others included "Expenditure rises to meet income". The defects of bureaucracy were his most frequent target: he believed that administrators make work for each other.

Plaque 3 - 41 Galgate
For most of the period in which he was Surgeon to the Durham military forces, Edward Nixon lived in Barnard Castle where his social qualities and skill in medical science were much appreciated. He died in 1869, aged 82. His medal, uniform and photograph are in the Durham Light Infantry Museum at Aykley Heads, near Durham.
This plaque is in King Street, just round the corner from Galgate on the first house on the left (now used as Council Offices).

Plaque 4 - 33 Galgate
Abraham Hilton was a tea and spirits merchant, and a long-serving member of the Board of Guardians of the Poor, the Local Board of Health and its successor, the Urban District Council.
He was kindly, practical and forthright. Though of a religious nature, he was keenly anti-sectarian and, at his own wish, was buried in unconsecrated ground high on the bank of the Tees, a short distance downstream from Cotherstone. (4 miles from Barnard Castle.)

Plaque 5 - 27 Galgate
From its earliest days Barnard Castle has been a market town; its main streets include the Market Place (once called the Great Market) and the Horse Market.
After many complaints about the state of the streets after a cattle market had been held in lower Galgate, an auction mart was built in 1892 in Vere Road where, much enlarged, it still exists. It can be reached on foot through Farmers Way, opposite this plaque.

Plaque 6 - 21 Galgate
When Roderick Murchison came to Barnard Castle his chief interest was fox hunting. His wife, Charlotte, who made drawings of mineralogical specimens for Henry Witham (see plaque 11) persuaded her husband, with the help of Sir Humphry Davy, that a country gentleman could become a scientist without abandoning his field sports. Murchison went on to be the only man who was President of both the Royal Geological and the Royal Geographical Societies. He was knighted in 1863 and was made Baronet in 1866.

Plaque 7 - 13 Galgate
Elijah Yeoman probably came to Barnard Castle in the 1870's. After living in Marshall Street, he and his wife moved to these premises in Galgate which became family home, studio and shop. He also opened a branch shop in Kirkby Stephen. Like other photographers, his regular income came from portraits and family groups, but his scenic pictures are outstanding; a large collection of them is held by The Bowes Museum.

Plaque 9 - 23 Horsemarket
In 1764 fire broke out in the stores, perilously near the powder-magazine. If the fire had reached the powder there would have been considerable loss of life and destruction of property.
Led by their officers, men bravely entered the burning building and moved the powder into the church where it was kept under constant guard until the stores were repaired.
In 1864 Militia Barracks were built in Birch Road, where the guard room and main entrance can still be seen.

Plaque 10 - 26 Horsemarket
The founder and first editor of the Darlington and Stockton Times was Mr George Brown. Orphaned at the age of 13, he worked as an office-boy in a solicitor's office; he went on to qualify as a solicitor and a barrister. He was Clerk to the Local Board of Health and also the Guardians of the Poor; he acted as a voluntary minister to the Unitarian Church, and in 1870 a newly-built Unitarian church (since demolished) was dedicated to his memory.
(The plaque is on the wall beside the left-hand window.)

Plaque 11 - 3 Horsemarket ("The Witham")
Henry T.M. Witham (1779 - 1844) was generous with both his time and his money, and worked strenuously for the Mechanics Institute (providing education for the working classes) and the Relief of the Sick Poor. His kindness was greatly appreciated: 2039 people subscribed to a ceremonial presentation to him in 1838, and after his death this building, in which his good work could continue, was erected to his memory. In 1860 a large hall was added to the rear of the building.

Plaque 12 - 14 Market Place
The part of the building bearing the plaque was the King's Head Hotel when Dickens stayed there. He interviewed various people, including a local solicitor and a man who had taught at William Shaw's Academy at Bowes (4 miles away); he visited that school and met the proprietor, and he used the information to create the fictitious school of "Dotheboys Hall" in his novel. (Owing to an earlier misunderstanding, the dates on the plaque are incorrect. Dickens actually stayed on the 1st and 2nd February 1838).

Plaque 13 - 9 Market Place
Charles Dickens used the name (minus the final 's') of Thomas Humphreys (1787-1868) clock-maker of Barnard Castle in "Master Humphrey's Clock". It was not a novel in itself, but a story in the course of which Dickens could introduce novels to his readers. "The Old Curiosity Shop" and "Barnaby Rudge" were first published in this way. This was the site of a shop to which Humphreys moved four years after Dickens' visit. (See plaque 16).

Plaque 14 - The Butter Market (or Market Cross)
Though created as a Butter Market, the building is locally known as the Market Cross. Probably a market cross formerly stood here and public announcements were made from its steps. After the Butter Market was built, announcements were made from stone steps (later removed) on the southern side. (The plaque is on the inner arch nearest to the entrance. Be very careful about traffic when walking to or from the building.)

Plaque 15 - Corner of Newgate and The Bank
Richard III, formerly Duke of Gloucester, became lord of Barnard Castle at the age of 25. His emblem, a boar, is carved on the church and the castle; several other buildings in the town formerly carried similar carvings, two of which still exist; one of the carvings is kept in The Bowes Museum. In addition to Richard's work on the castle and the church, he obtained a licence to found a college at Barnard Castle. The white roses planted in front of the plaque represent the House of York of which Richard was a member. (This plaque is located in a small enclosure).

Plaque 16 - Corner of Newgate and The Bank
The shop which attracted the attention of Charles Dickens in 1838 stood here but was demolished during a road-widening scheme in 1933-4. Humphreys was apprenticed to a local clockmaker in 1806 and established his own business in 1815. Two sons followed the same trade, one of them in Hartlepool, and when their father died his daughter-in-law continued the Barnard Castle business, from different premises in the Market Place, until her death in 1891. The family had been making clocks (and sometimes watches) during the reigns of four monarchs. (This plaque is located on a low wall).

Plaque 17 - 30-32 The Bank
As well as a private house, an inn, and a restaurant, Blagraves (named after its seventeenth century owners) has been a rope-works and, in the twentieth century, a museum. The little stone musicians on the front wall are a twentieth century addition, but on one of the rear walls is a carved boar, the emblem of Richard III (1452-1485).
If you wish to avoid a steep downhill and then uphill walk, omit plaque 18 and go along the route under the archway on the left of Blagraves.

Plaque 18 - 8 Thorngate
The Hon. Sir John Hullock was born at Barnard Castle in 1764. He was kind and generous to his fellow lawyers and to the poor of his native town. He died at Abingdon while a judge on the Oxford Circuit, but his body was brought to Barnard Castle for burial. His memorial, surmounted by the figure of Justice, is in the Parish Church, next to that of his wife. A large portrait of him, which was presented to the people of Barnard Castle, is kept at The Bowes Museum.

Plaque 19 - Broadgates Chapel, facing The Demesnes.
Because of the alteration and addition of windows at the east end, the building has lost much of its original appearance as a chapel, but the south wall has changed less. The Wesleyan Methodists faced strong opposition while creating their chapel, and sometimes newly-built sections of walls were pulled down during the night. The arched tunnel accommodated a medieval route called Broadgates which linked the castle and the town to The Demesnes. Walk up the churchyard, through a narrow passageway, cross the road, and continue through another narrow passageway, at the end of which plaque 20 is above your head.

Plaque 20 - Hole in the Wall, Queen Street.
John Wesley preached in the Meeting House on the evening of 7th June 1763 but, on the following morning, so many people gathered to hear him before they went to work that he had to preach in the open air at 5.00 a.m. A century later, consideration was given to turning the Hole in the Wall into a proper road, linking Queen Street to Newgate, but nothing came of it and the Meeting House survived, though by that time most religious organisations had their own places of worship.

Plaque 21 - Low Mill, Hall Street.
Industry in Barnard Castle began on the riverside, using water-powered machinery to produce textiles. In the mid-nineteenth century, however, the land around Queen Street became a new industrial area, mostly consisting of metal works. Low Mill typified this change: its earlier riverside premises had been a flax mill before becoming a foundry which then moved to its final site.

Additional Plaques A1 - Teesdale Mercury, 24 Market Place.
In 1854 John and Reginald Atkinson produced the first issue of The Teesdale Advertiser and Monthly Chronicle at their general printing office in the Market Place, Barnard Castle.
When it became a weekly newspaper, the name Advertiser was dropped and replaced with Teesdale Mercury. The familiar masthead took its place at the top of the front page along with the Barnard Castle town seal. In 1880, the Mercury moved from its original premises, at what is now the Nat West bank, a few doors down the street to offices at 24 Market Place, where the paper is still based today.
Route information provided by DCC.