You are here > Home > Things to Do > Cow Green Geological Trail 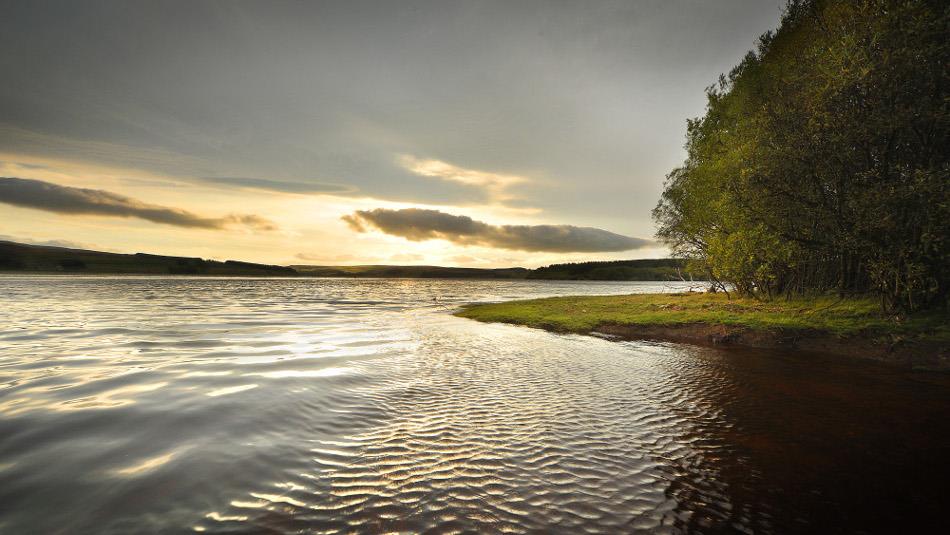 Cow Green Geological Trail Approximately 4 kilometres each way, this linear trail uses well-marked footpaths and minor roads.
A longer (12 km) circular route can be made by continuing past Widdy Bank Farm to the Cow Green road. Allow a full day for the complete walk. At stop 7 there is a steep, scrambly descent. If you do not want to negotiate this then turn around at the top of Cauldron Snout and return to the car park. (The route is wheel/push chair accessible to this point) - This makes a gentle alternative walk of about 5km.

Stout boots, warm clothing and good waterproofs are advised, as even in summer the weather of Upper Teesdale can be harsh.

This route incorporates Hannah's Meadow Nature Reserve. In places the route passes old mine workings, parts of which may be unstable. Please keep to the footpaths and do not attempt to enter old tunnels or any old surface excavations. The trail will introduce many of the rocks which make the Teesdale landscape so special and which make the dale a haven for rare and interesting plants. Do examine the rocks, minerals and plants you will see along the way but please do not collect them: leave them for others to enjoy.
Useful maps:
Ordnance Survey
1:25 000 Explorer OL31 North Pennines Teesdale and Weardale
Park at Wheelhead Sike car park at Cow Green (NY 811 309) and follow the route on the map, stopping at the points marked. (N.B. These do not correspond to the nature trail markers).
CAR PARK VIEWPOINT
1 Far to the west are the distinctive peaks of Great and Little Dun Fell and Cross Fell. Their bulky form and flat tops, especially Cross Fell, reflect the almost horizontal layers of sandstone, limestone and shale of which they are built. About 100 metres on from the viewpoint, to the right of the road, is a conspicuous area of flat grey rock. This is the Smiddy Limestone, one of many beds of limestone of which the North Pennines are built. These limestones were formed as layers of soft limey mud on the floor of a shallow tropical sea, about 330 million years ago during the Carboniferous period of Earth history. At this time the area that was to become the North Pennines lay almost astride the equator. Small white fragments of shell and pieces of coral can be seen within the grey limestone. Just beyond this rock exposure, turn right onto the narrow gravel footpath which joins the single track road to Cauldron Snout. Bear right through the gate.

2 Looking back from the gate you can see a line of low crags. These are outcrops of the Smiddy Limestone. The narrow area of ground beneath the crags marks the outcrop of the beds of sandstone and shale which separate the Smiddy and the Peghorn Limestone (which you are about to cross). During Carboniferous times layers of mud that accumulated on the sea floor became the shales we see today. Beds of sand, washed in by ancient rivers, are preserved today as sandstone. Rocks like these, formed from ancient sediments, are called sedimentary rocks. Much of the North Pennines consists of regular alternations of beds of limestone, shale and sandstone.
As you continue along the narrow road, notice how limestone beds form low lines of grey crags separated by gentler slopes on the outcrops of shales and sandstones. Notice too the sharp contrast between green grass on the limestones and the heather on sandstone or shale. The road dips and crosses a small stream. Just before the top of the next rise, look for a shallow trench on the left.This marks the line of a mineral vein, known as Rod’s Vein.

3 Mineral veins are vertical bands of mineral which fill fissures, usually faults, within the surrounding rocks.
The old spoil heaps contain fragments of the minerals found in the vein. White barytes is most abundant, with traces of grey metallic galena, the main ore of lead. The veins at Cow Green contained insufficient lead to be workable, but the barytes (Barium sulphate) was mined for use in the paint and chemical industries until 1952.
These mineral veins formed about 290 million years ago, as warm waters rich in dissolved minerals flowed through cracks in the rocks, driven by heat deep beneath the surface. As these solutions cooled, the dissolved minerals crystallised on the walls of the cracks, gradually building up the vein.

4 The small outcrops of rock, most noticable to the left of the road, are of Melmerby Scar Limestone. Unlike the limestones seen at the beginning of the walk, these are white and crystalline and show a distinctive crumbly weathering, earning them the local name of ‘sugar limestone’. The ‘sugar limestone’ is actually a marble (a limestone which has been altered and recrystallised by the effects of great heat millions of years ago). Such rocks are called metamorphic rocks. The source of this heat will be explained at the next stop.

5 The rusty brown rocks over which flows Red Sike and which gives the stream its name, is known by geologists as dolerite. Unlike the limestones, sandstones and shales, dolerite was not formed from ancient sediments, but formed by the cooling and crystallisation of molten rock. Such rocks are called igneous rocks.
The rock at Red Sike is at the top of a huge sheet of dolerite known as the Whin Sill. 295 million years ago, this was injected into the layers of limestones and other rocks as a hot liquid at over 1100°C. Here in Teesdale this layer is almost 75 metres thick. As it cooled it baked the surrounding rocks, turning the limestones near to it into marble, or ‘sugar limestone’.

6 You may notice that the dam wall is actually in two parts. The part nearest to you is a solid concrete wall built on hard Whin Sill. The other part is an earth bank built where the dam crosses the old river channel that is filled with boulder clay. To this point the walk is wheel/push chair accessible. Just before the bridge, turn off the road and follow the Pennine Way to the top of Cauldron Snout.

7 Here the River Tees flows across the very hard outcrop of the Whin Sill dolerite. Notice the well-marked vertical cracks or joints in the rock. These are known as columnar joints and they formed during the very final stages of cooling of the dolerite. Giant's Causeway and Fingal's Cave are well known examples of more regular columnar jointing. Follow the very steep footpath down the side of Cauldron Snout, taking particular care on the rocks, which may be slippery. If you are unsure about using the steep path you can view parts of the next stop from the top before returning to the car park.

8 The Whin Sill dolerite forms both the waterfall and many small craggy outcrops on both banks of the river. You can see how a huge area of the western bank is smooth and grassy and completely free of rocky outcrops. This is the old channel of the River Tees dating back to before the last glacial period. Debris, mainly boulder clay dumped by the ice, plugged the old valley to such an extent that when the ice melted and the river began to flow again it was diverted to where it cut a channel through the hard Whin Sill dolerite, forming the waterfall of Cauldron Snout.

9 Between Cauldron Snout and Widdy Bank Farm the river flows in a steep sided gorge cut through the Whin Sill. Downstream from the waterfall, white marble, also part of the Melmerby Scar Limestone, may be seen beneath the dark grey crags of the Whin Sill. This is the bottom contact of the Whin Sill. From Red Sike (point 5) to here, you have travelled the depth of the Whin Sill at this location. Notice the striking vertical columns of dolerite in the cliffs on Falcon Clints and, further downstream, on Cronkley Scar.

10 The footpath here crosses small outcrops of a rather rubbly looking rock known as conglomerate. This is made up of pebbles of a variety of older rocks set in a mud. These conglomerates date back to early Carboniferous times about 330 million years ago when the old rocks, now buried beneath the North Pennines, were pushed up to form a mountain chain. Pebbles and other debris produced by the erosion of these mountains is preserved here as conglomerate. As the area was gradually submerged below the Carboniferous sea,muds, sands and silts gradually buried the conglomerate. These can be seen in the steep river bank, immediately above the conglomerate. Eventually these were in turn buried beneath the Melmerby Scar and other later limestones. The older rocks, representatives of those that make up the Lake District mountains, are exposed on the south bank of the river, at Pencil Mill, about 1km east of Widdy Bank Farm.
This is the end of the trail, you now have the option of turning around and retracing your steps to the car park or continuing along the Pennine Way until you reach Widdy Bank Farm, following the track to the Cow Green road and on to the car park (approximately another 7km).
Route information provided by AONB.