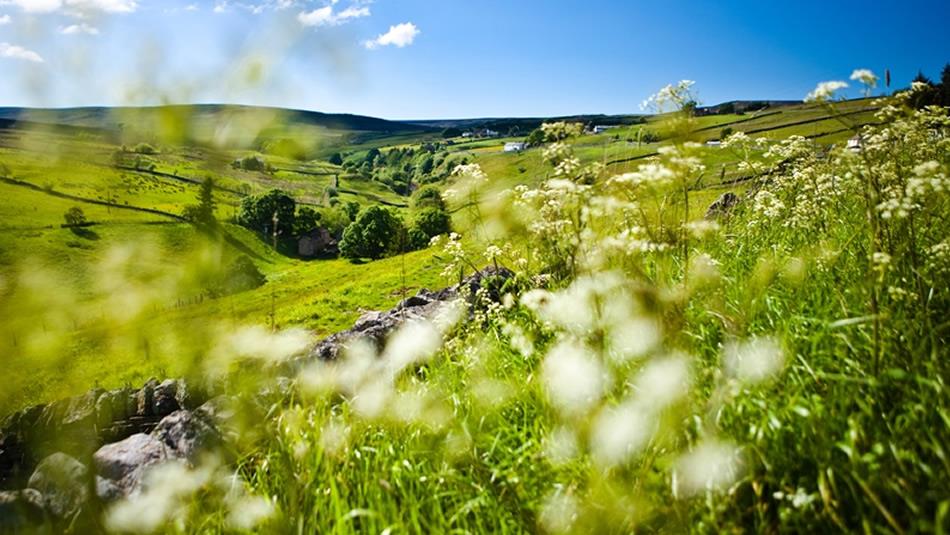 
The walk starts from the car park at the Gaunless Smelt Mill and follows the last section of the ‘Steele Road’ circular walk. Please keep to the public rights of way as old colliery sites can be dangerous. From the car park cross over the bridge and take the public bridleway to the left (look for the bridleway sign) which runs above the site of the Gaunless Smelt Mill and through Cowclose Plantation. Go through a bridle gate keeping the fence on your right, and over a stile. Then with the fence on your left to another gate and then over Cowclose Beck, into Cowclose Wood. Follow the path uphill through the field and towards a gate.

A The upper Gaunless Valley was an area with many small scale collieries. They employed only a small number of men and their output was sold locally to coal merchants from large towns in the region. Follow the track and cross a style on your left. The route here crosses the line of the Woodland Tramway.

B The Woodland Tramway brought coal from workings in Arn Gill and ran northwards up the valley side, before disappearing into a tunnel running underneath Woodland to the bottom of the winding shaft of Woodland Colliery, which closed in 1928.
Continue across the fields and once over the small footbridge on the other side of the tramway, the remains of Cowley Colliery are clearly visible to the right of the bridleway.

C Beside the spoil heap are the remains of bases for the steam engines which operated the colliery winding gear.
Turn right after the ruined building and follow the fence on your right until you cross a stile. Follow the footpath northwards, crossing two stiles immediately after each other and two streams, until House and Holme Farms are reached. Go into the yard through four small gates. Continue on, leaving the farmyard. Where the farm track bears south, carry straight on towards a derelict building, and pass behind to Brass Sides Farm.

The walk continues eastwards past West Fold Garth and East Fold Garth farms, before turning left along the farm track towards the village of Woodland. Once at the village, turn right. At the Edge Hotel follow the road round to the right, heading down the road known as ‘Sun Road’ (previously ‘Fines Lane’).

D The single storey double gabled house opposite the Edge Hotel was formerly West Pitts offices and stables. The Edge Hotel was at the end of the turnpike road from Eggleston in Teesdale. The road was built to carry coals to the lead smelt mills from West Pitts. M i l e s t o n e s marking the distance can still be found along its route.

The road down from the hotel became known as the ‘Sun Road’ probably because it ran southwards towards the sun in the direction of Copley.

After about 250m, turn left onto the public footpath that leads up towards Lunton Hill Farm. At the farm, the walk passes between the farm buildings then out through a gate. Turn left towards another, then to a gate in a newly built stone wall. Turn right and follow the wall downhill through another gate onto the lane that leads to Lynesack Church.

E Lunton Hill Farm was formerly the farm for Cowley Colliery. It also provided a home for the Woodland Colliery Manager and the local tennis club.

F Located near the hedge at the back of Lynesack Church is the grave of Edward Smith who died in 1884. It is said he was the inspiration for the character ‘Smike’ in Charles Dickens’ Nicholas Nickleby – a long suffering pupil at Dotheboys Academy in Bowes. The old school building in Lynesack was erected in 1852, and closed in 1950. It was home to the Butterknowle Brewery from 1990 to 1998.

From the church, walk down the lane and turn right at the road junction. On this corner is the old school building. At the bend in the road carry straight on, taking the footpath which runs between two hedges, following the course of Howle Beck. Go over a stile then bear left over another stile and then through a gate. Go through a second gate, over a wall, and take the track on your left and then right over the wall. Go around the side of the house and head straight across the fields to Copley. At the main road turn right, cross it then go left down
Chapel Terrace. After the road bends sharply to the right take the left hand track between two houses to the stile in the wall just after Low Trough Farm.

Continue over two stiles and down the steps that lead back to the start of the walk.