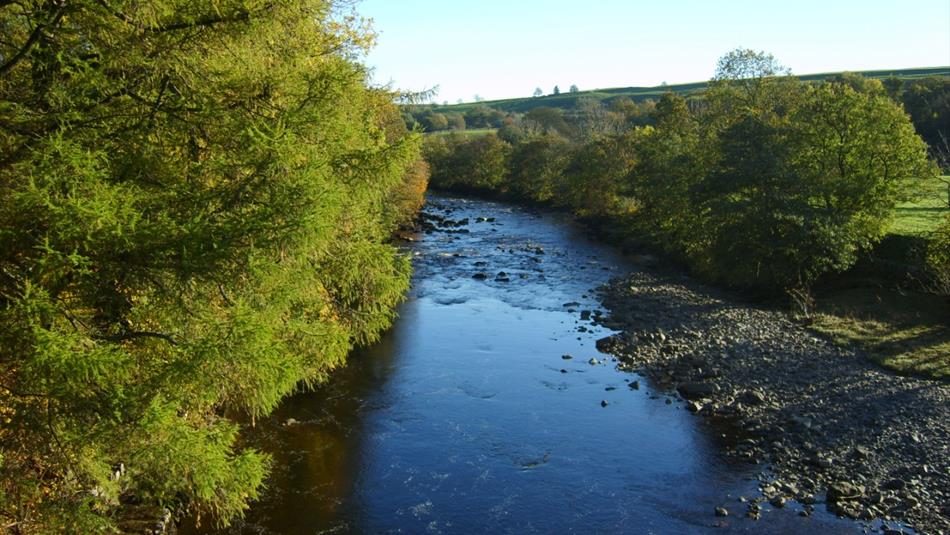 A 6 mile Circular Walk - from the Fox and Hounds on the West Green, Cotherstone -cross the main road and walk down the narrow lane which drops steeply to The Hagg, a public open space area which used to be a common pasture land. Follow the lane alongside the high stone wall until you come almost to the banks of the River tees close to a ford crossing, indicated by the pebble banks which form shallows. High up on your right is Hallgarth Hill, the site of a 12th Century Castle.

Turn left just before the river to cross a footbridge over the River Balder, and important tributary of the Tees, and follow the tarmac path through the woods. When you soon come to another bridge on your right – DO NOT GO OVER THIS, but carry on straight along the river bank and bear left shortly to a stile at the top of the bank. Go over this stile and follow the right hand edge of the filed to another stile in the fence where you should cross. Turn left over the fence and carry on to cross a small stream by stepping stones. Once over the stream, go over another stile and up the grassy bank ahead of you, diagonally towards the right hand corner of a walled enclosure. A track leads you alongside this enclosure to Woden Croft, a large house which used to be a private school. Pass in front of the house and immediately turn right through a gate and continue between cottage and farm buildings to come out into the corner of a sloping filed. Keep to the track along the edge of the filed, with the steep wooded banks of the Tees on your right, and into another large field.

(At this point you may wish to make a short diversion through the filed gate down to your right, to the ‘fairy cupboards’ - these are small caves which have been scoured out of the rock by the action of the water in the River tees. Return to the main road by the same path).
Bear left across the large field to pass through a stile and walk up the bank ahead to a gate in the right hand corner next to the trees. Go down through the next two fields and then right at the bottom of the slope to a stile which will lead you the deserted farm buildings at Low Garth.
Go over a stile and, keeping the buildings on your right, bear left up the bank ahead of you, aiming for a small gate in the hedge. Once through the gate, cross diagonally to another one in the opposite left hand corner of the field. Keeping in the same general direction across the next field, you will soon come to an avenue of trees and field gate which leads into an enclosed track, known as Sannings Lane. Follow this for about ¼ mile to come out in the picturesque village of Romaldkirk. The Church of St Romald is in the centre of the village and dates from the 12th Century, although there were later additions in the 13th and 14th Centuries. Not far from the Church is the ATTRACTIVE Rose and Crown Inn dating from the 18th Century. The village has three greens, on two of which you may be able to see the old village stocks and water pump.
From the end of Sennings Lane in Romaldkirk, bear right across the green and head towards the cottages at the far end of the village. Before reaching the cottages, take a track off to the left, known as Primrose Lane, and bounded by stone walls. Cross a small stream by a stone footbridge at the bottom of the track and after a few paces climb over a stile in the stone wall on your left. Head diagonally right across the large field to another stile in a stone wall at the top of the bank and in the corner of another large field. Once over the stile follow the right hand edge of the field to a wooden stile in the boundary fence with the next field. On your right, the woodland drops steeply down to the River tees far below. From the stile follow the concrete block wall alongside the woodland and after about 100 yards gradually bear left across the field towards a garage next to the field gate. Over to your right the view opens up to the attractive stone bridge across the Tees and the imposing building of Eggleston Hall on the hillside beyond.

Go over the stile and turn right down the road to Eggleston Bridge.
Eggleston Bridge probably dates from the 15th Century. It was rebuilt in the middle of the 17th Century and again in 1983/84 when the parapets were partly rebuilt. An important feature of the bridge is a large central pier with its triangular-plan cutwaters on both faces rising to form pedestrian boys.

Cross the bridge and turn immediately right to cross a ladder stile. Follow the tarmac road for ½ a mile, with open fields on your right and the trees of Great Wood on your left, until you come to a gate across the road, just before a concrete building. Your route takes you over a ladder stile on the left in front of the gate and up a flight of steps into the wood.
(Before climbing up through the wood, you may wish to see the outfall of the ‘Kielder Tunnel’ which lies through a gate and just beyond the concrete building. The tunnel was built in 1980/81 to transfer water between the rivers Tyne, Wear and Tees).
At the top of the steps, follow the path right through an area which in spring and early summer has a lovely display of wild flowers. The path continues upwards towards the left to reach more steps which were built by volunteers to mark the Jubilee of the Ramblers Association in 1985. The steps end just beyond a small stream which cascades down the cliff face to your right.
On reaching the small gate in the stone wall, go through this and bear slightly left across the field, past a spring to a stile in the stone wall ahead. Once over the stile, head diagonally left up the slope of the next filed to a gate in the corner. Go through the gate (waterlogged area beyond), aim to the left of the farm buildings of East Barnley Farm up ahead. Ignore the tracks leading off to the left, and aim for the telegraph pole and then onto a field gate in the wall beyond. Go through the gate and bear right across the filed to the steep sided Raygill Beck on the far side (just before a gate in the boundary wall). Cross the stile next to the gate and bear right across the marshy ground to a stile in the wire fence. Go over this and bear left up the slope to another stile in the stone wall. In the next filed you join a clear track - alongside a fence - follow this and enjoy the view of Teesdale and Baldersdale to your right. Go through the gate and continue along the next field edge to another gate. (Here you can make a diversion by going through the gate and following the field edge round to the right to Percy Myre Rock). Percy Myre Rock is reached through a stile at the top of the field. According to Legend this is the site where the last of the Fitzhugh’s, medieval Lords of Cotherstone Castle fell to his death. From the viewpoint you can see the flat topped hills of Goldsborough and Shaklesbrough in the distance beyond Baldersdale. Return to the main route by the same stile and turn left and retrace your steps to the main path by the stream.

The main route continues through the field, with a small stream on your left – which you soon cross, just past a large rock known locally as the ‘Wishing Stone’ . Once over the stream – DO NOT CLIMB THE BANK AHEAD, go through the stile in a stone wall on your right and follow a narrow path along the top of the wooden gorge. With a stone wall on your left continue and cross the stile. Go diagonally across the field and down to a gate and track to the caravan site. Aim for the right hand wall of the toilet block ahead to reach a stile next to a gate and track which leads down through the trees. Once through the trees bear right through the gorse and head for the footbridge across the River Tees. Cross this and turn left to retrace your steps to the Fox and Hounds in Cotherstone.